Article Text
Fascism's European Empire: Italian Occupation during the Second World War . By Davide Rodogno . Translated by Adrian Belton . ( : Cambridge University Press , 2006 . Pp. xxi, 504 . .)
Readers of popular fiction or viewers of movies may have seen depictions of Italians in the Second World War as lovers rather than fighters. As occupiers, they were more likely to woo the conquered with mandolins than to persecute their perceived inferiors. Davide Rodogno's 2003 work Il nuove ordine mediterraneo substantially revised this romanticized view of the so-called brava gente—of the Italians as the war's good guys. He demonstrates in detail the often brutal nature of fascist wartime occupation and the sweeping aims of Italian racialist policy. English-language readers now have access to this excellent monograph thanks to Adrian Belton's fluid translation.

Rodogno argues that historians need to understand fascist Italy's projects and its aims in the territories that it conquered during the war. He investigates several interrelated questions: How did Italy plan to deal with occupied France, Yugoslavia, and Greece? What would the new world order that dictator Benito Mussolini aimed to create look like? Did the Italian army share Mussolini's vision? How did Italy work with and how did it seek to obstruct its German ally? Did Italian zones of occupation serve as safe havens for Jews and other refugees?

Rodogno's account covers a wide array of issues, including Italy's occupation policies, its relations with Germany, its attempts to exploit occupied territories' economies, the relationship of fascist ideology to the administration of occupied territories, legal and jurisdictional questions, forced Italianization, collaboration by subject populations, and the Jewish question. He concludes that Fascist Italy aimed to conquer a spazio vitale—a vast empire in the Mediterranean—and to overthrow British and French plutocratic domination. Mussolini's new order would provide space and resources for and would help to create a new fascist man, convinced of Italian racial supremacy and prepared to rule the empire with a rod of iron.

In spite of these sweeping aims, German economic power and contempt for its junior Italian ally severely curtailed Italy's freedom to maneuver in territories conquered not by Italian efforts but by German feats of arms. As rebellions against fascist and Nazi occupation gained strength, the desperate Italian response became increasingly brutal, mirroring the tactics of Nazism, if not the frequency and intensity of the Nazis' abhorrent violence. Although some Italian generals and diplomats worked on a personal basis to save refugees, the state and most of the military made no attempt to rescue the persecuted, and, in fact, cooperated to a degree with Nazi atrocities, turning over Jews and other refugees to their persecutors.

Rodogno relates this disturbing story exceptionally well. His research is first-rate. He has worked assiduously in Italian archives and provided comprehensive and compelling findings. He is careful with the resulting evidence, clearly understanding its importance but also its limits. His explanation is meticulously organized and presented, and nonspecialists will be able to follow the chain of argument easily. Rodogno cautiously offers this work as a first step in understanding Italy's occupation policies during the war, but he has accomplished far more than that limited aim. This book will be the standard for years to come, at least until the release of currently closed archival evidence allows future historians to complement Rodogno's persuasive research and argument.
Top

Sounds like a good read. I remember glancing through this at Blackwell's in Oxford a few years ago, I believe its a translation of the orginal. Indeed, the Italians often get away with the nice-guy image in WWII

I think this has something to do with choosing its allies. In reality, I don't think Italy could have choosen a worse ally in WWII - in fact Italy had no allies!
Top

I wonder if this will become a trend,Thomas Schlemmer's Invader's Not Victims was published in 2008,revisiting the role of the Italians in Russia.Not exactly kind apparently.

A great number of people hope for those archives to open up,it's not going to happen!

I think the image that the Italian forces in WWII as a peace loving, wine making, and festival enamored one is pure Hollywood. Haven't you ever seen What Did you Do In the War, Daddy? Classic Hollywood revisionism.
Top

Capitano wrote:I think the image that the Italian forces in WWII as a peace loving, wine making, and festival enamored one is pure Hollywood. Haven't you ever seen What Did you Do In the War, Daddy? Classic Hollywood revisionism.

I agree! And Bryan's right there are more authors questioning the WWII propaganda myths. There's plenty of material for the modern historian to uncover.
Top

That is what is great about being a historian. History is always changing, yes believe it or not. History is an interpretation by the one writing it. And when new documents or records are opened up for research, new ideas or theories arise. Even something as stupid as a television show can be viewed as history. Think CSI. A crime has been committed, there are several versions of the story, he said/she said, and the investigators come in after the fact and try to figure out what happened. Awesome.
Top

Capitano wrote:That is what is great about being a historian. History is always changing, yes believe it or not. History is an interpretation by the one writing it. And when new documents or records are opened up for research, new ideas or theories arise. Even something as stupid as a television show can be viewed as history. Think CSI. A crime has been committed, there are several versions of the story, he said/she said, and the investigators come in after the fact and try to figure out what happened. Awesome.

About this matter I bought recently a book by Alessandra Kersevan - "Lager Italiani, Pulizia etnica e campi di concentramento fascisti per civili jugoslavi 1941-1943" Edizioni Nutrimenti (Italian Lagers - Ethnic cleaning and fascist lagers for jugoslavian civilians); I give you this information just to remark that not in all the occasions the Italians were "brava gente"
Riccardo
Riccardo Trotta
Top

My family at the father's side has origin from parts of former Yugoslavia, which was part of the Independent State of Croatia, and survived genocide implemented in that puppet Nazi country. I have to say that most of the people survived thanks to Italian soldiers and officers. First who alarmed Mussolini about massive massacres committed by Ustashas was general Alessandro Luzano. Not long after, Italian occupation zone spread to the part of ISofC, saving thousand and thousand lives.

A letter of gen. Luzano to Mussolini
https://www.youtube.com/watch?v=U1VAjAWbIaA

Thanks for this post, I appreciate it (I do miss these kinds of discussions). And not just in Croatia, Italian soldiers stopped the deportation of Italian Jews destined for German concentration camps, often at gunpoint (i.e., Italian soldiers pointed their guns at German SS/Gestapo), and if that made the Italians "bad allies" I'll take that any day of the week. There was no Holocaust in Italy and that speaks to the character of that nation, then and now.

Here's a good book on this very subject: 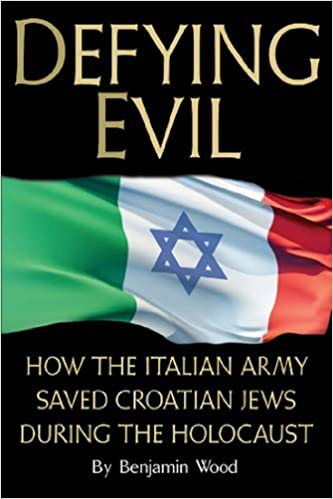