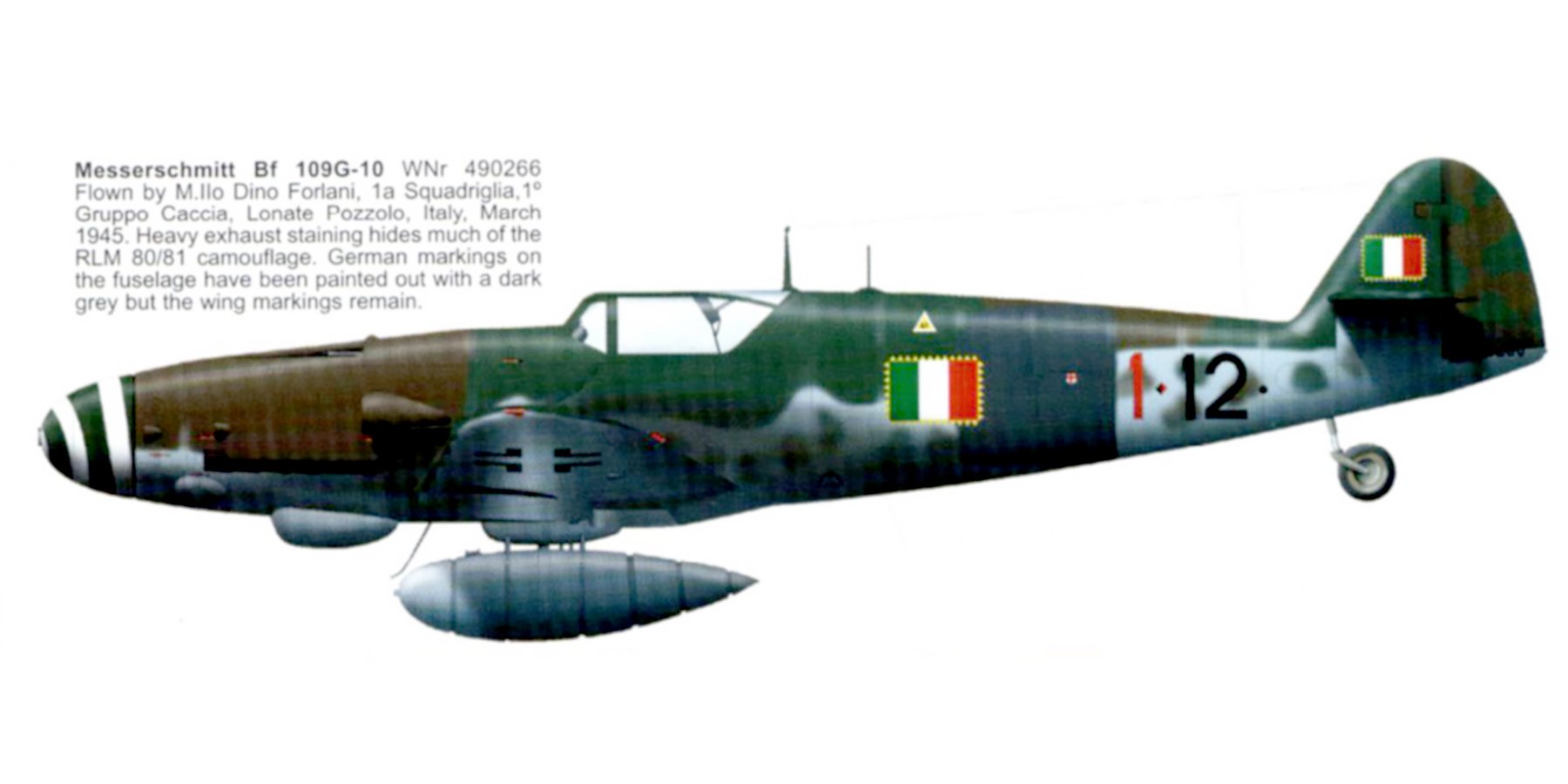 The profile of Forlani's machine in Stormo decals was based on the one given in "The Messerschmitt 109 in Italian Service 1943-1945", 1985, F. D'Amico and G. Valentini - the profile was totally speculative and was published with a starboard view that I mirrored to port, although at the time of printing the book the plane had been believed to have been a non-Erla built machine. Erla built machines were noted for the absence of the chin bulges due to the Type 110 cowling and the absence of the curved fairing on the port side of the plane - profile II should look more like profiles III and IV which I mentioned in the notes for profile II in the decal sheet. And for exactness, on Erla built G-10s, the rectangular panel end line below the cockpit was several inches back from where it is often depicted in profiles (and kits) - in error - but is in the correct position in profiles III and IV Stormo Decals 48006. The Erla built G.10 cowlings were actually wind tunnel refinements of the WNF & Mtt built machines but both those firms never introduced the change presumably because of disruptions to their production lines. Finally in profile V, K4, there are no photographs for that camouflage, the camo originated in Ali Straniere in Italia #1 and is speculative.
Vince Tassone
Top

Fantastic !
Thanks you so much Vince for all this info, very helpful.
1. As for the 3 non Erla G10s, do you know any pics or profiles from them ?
Were they wearing the Balkan Kreuz ?
Also the last two in your list are R2, so supposedly they had Rb 50/30 or Rb 75/30 camera mounted vertically in bay aft of cockpit and fully-retractable tailwheel ?
2.

Interesting, I just thought they were a different version of cowling from WNF & Mtt, not necessarily a more advanced design.
Cheers,
Top

Salut Farman,
After having studied for years the matter I could tell you that:
- no known pics are currently available for those subjects
- if some profile exists, it would be totally speculative and there is no reason to make a model after it, if you want to exactly replicate the real thing
- by consequence, your opinion about the true aspect of those Messerschmitts has the same value than that of an artist, and sometimes more
- best thing in this case is to analyse existing examples of the same production batch (better if close in Wk.n.) and trace a credible camo pattern, then apply insignia and codes after known info. This is a 'statistical' approach
- generally, in that late period the Balkenkreutzen were worn in underside wings, with II Gruppo having them also upperside while I Gruppo had ANR wing fasci instead
- ANR had no reason of strategic or tactical reconnaissance, they just needed fighters. So, even though these 109 had recon gear, hardly they wore a full -and heavy- camera equipment
I hope this helps
Á bientôt
Stefano
Top

Thank you so much Stefano !!
Very clear explanations and reasoning, makes total sense. It helps A LOT.
By any chance have you seen profiles of the non Erla ? I couldn't find any even with the War provided by Vince. Probably that nobody did dare to adventure in drawing something without any reliable source.
Cheers,
Top
Post Reply
5 posts • Page 1 of 1