Post topics relating to Colors, Camouflage Schemes and Markings of the Regia Aeronautica and ANR
Post Reply
5 posts • Page 1 of 1

I found this photo on the internet and as I am about to start detail painting on my PCM kit I wondered how accurate it is, is it realistic ?
The blue colour on what apears to be the throttle seems a bit strange. 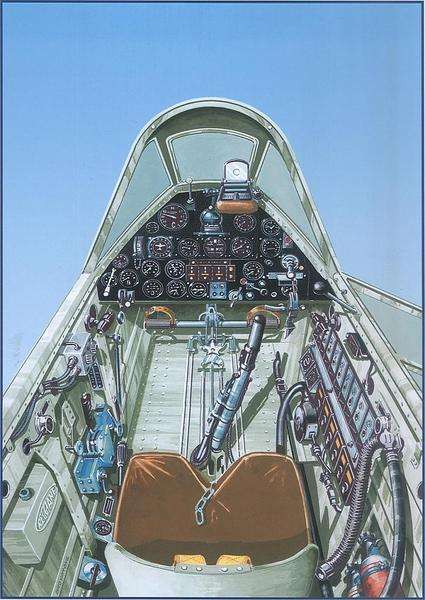 The cockpit drawing is from the ADI book. There's nothing specific about the interior cockpit colors of this plane, there were very few that were constructed but there is some info in the color guide that might be of help with the interior green:

On the contrary of what commonly believed, the light grey was the standard color for interiors, or at least for cockpits, in RA aircraft. It was most probably the same Grigio Azzurro Chiaro 1 -which indeed has little of blue- and that in documents of the Tavola 10 era is mentioned as "yet in use". I found it with the same hue (FS 36307) also in contemporary motor bikes or metal furnitures. There are at least two exceptions known: Aermacchi which used a pale green (FS 34558, but note that 200s and 202s were built also by Breda and SAI Ambrosini which used grey) and Reggiane, where in the cockpit of 2005 was found a light grey-green (FS 24272). Reggiane also used other kind of greens, at least a darker grey-green for inner fuselage and a grass green (FS 34230) for separate parts as ammo boxes or fin (2001).
About the questions on the shown cockpit drawing, by watching the photos of actual Re.2005 cockpit, the throttle box it should have been the same colors of walls and structure. Instead, the round Drager Auer oxigen device at bottom right should have been painted RLM 24, as blue was the colour code for oxygen devices either in LW and in RA. Components made by other firms could have had their own colour finish, usually a light or pale grey, like the radio control box top left in the drawing.
Stefano
Top

Thank you for that information, I spent some time last night starting on the detail cockpit painting and your input is very handy especially the information on the Oxygen and radio equipment.

For whatever it may be worth, the comprehensive recent book, Blueprint File Reggiane RE.2000, published by Gli Archivi Ritrovati, indicates that earlier Reggiane product's cockpit may have also used a pale green instead of the regulation gray.
Top
Post Reply
5 posts • Page 1 of 1