Post topics relating to Colors, Camouflage Schemes and Markings of the Regia Aeronautica and ANR
Post Reply
6 posts • Page 1 of 1

Hello group. I am researching the single SM75 that apparently saw service in 1940 during the Battle of Britain. I would be grateful if anyone could shed light on the colours, markings, and version (was it simply the passenger version.). Much thanks.

...Per this Håkans Flygsida post: http:/surfcity.kund.dalnet.se/falco_bob.htm twelve Caproni Ca.133s were assigned to the Corpo Aereo Italino (CAI) formed on September 10, 1940 presumably transporting field equipment to Belgian air bases in Melsbroek & Ursel prior to & whilst other CAI aircraft arrived. The sole Savoia-Marchetti S.75, an ex-civil aircraft, was assigned to CAI Commander Generale sa Rino Corso-Fougier as his personal steed per this photo taken outside a hangar at Novi Ligure Piedmont near Genoa during September 1940: 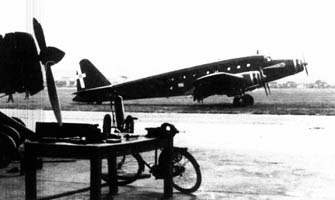 The aircraft retains its civil SM.75 "speed logo" aft of the fuselage engine though sports Distintivo di Guerra rudder crosses & House of Savoy crests, apropos given its status as the CAI Commander's transport. The poor photo quality & contrast makes for difficult paint scheme interpretation tough methinks it was painted green mimetico colors possibly just a single one over the topsides presumably with Giorgio Mimetico undersides either by Savoia-Marchetti or at a Servizia Riparazioni Aeromobili e Motori depot in Italy.

With my huge thank you sir! Keep well and safe. Happy modelling!
Top

...Am assuming you're going to build an S.75 kit, am starting on my unarmed civil converted Balaton Modell one later this month in early Regia Aeronautica Italia 602° or 610° Squadriglia livery without white I.D. band. I'd wanted to build it in Forțele Aeriene Române livery with German RLM 61, 62, 63, 65 "export colors" but was unable to obtain bottle of RLM 61 enamel paint, probably as well given the resin kit is slick, horrendous masking problems painting so many colors for sure! I have by the way painted models with Poly Scale acrylics, masking over them as well, modern acrylics are much better, still have nightmares doing those builds though.

...one-time buying of already hard to get enamels for mixing not worth the bother, build with be Italian, got all the paints